I couldn’t help feeling a little apprehensive as I approached my powered steed – having never ridden an electric bike before, I had visions of myself taking off in an uncontrolled fashion and riding into the wall opposite. Happily, this was far from the case…

My EBCO TR-60 hybrid ebike had impeccable manners – I took the precaution of selecting the lowest power setting (it only has 4 and is simple enough to use that even a Luddite like me could operate it after a one-minute demonstration) and after I climbed aboard and started to pedal, we glided sedately off. Within a mere few seconds I felt confident enough to boost the power mode to ‘Sport’ – its highest setting – and delighted in the surge of power I felt as I pressed the pedals. I can see this is going to be addictive! 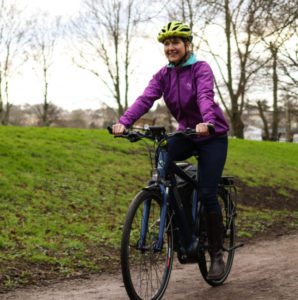 My 3-mile journey home was a breeze – and a lot of fun. Zooming off from the traffic lights was a joy, as were the hills I encountered. You still have to pedal (stop and the motor cuts out) but it’s far less effort than I’m used to on my regular bike. Riding an ebike I could easily get to work without breaking sweat, so no worries about needing a shower, or even a change of clothes. I was surprised how quiet it was too – I couldn’t hear the motor at all.

I liked the clear display on the handlebar that showed me my power setting and speed. It was tempting to pedal harder to see the speedometer increase – although I’d heard the pedal-assist is limited to 15.5mph, if you put in the pedal power you can go faster. I also experimented with turning the power setting to zero, which was fine if I did it once I was up to speed on the flat, or going downhill.

When I got home the bike was rather heavy and unwieldy to manoeuvre into my shed, though – that extra weight of the motor and battery really makes a difference when the power is off. I certainly wouldn’t want to carry it up any steps. Charging the battery was a doddle, it just slid off the bike once unlocked with the key.

Now, where’s the steepest hill I can find to ride up tomorrow?