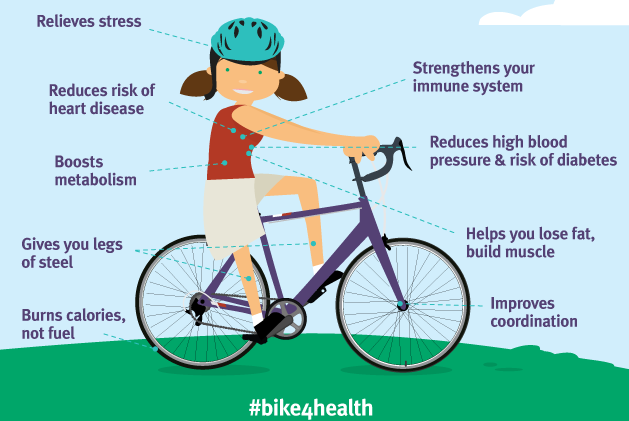 Commuting by bike halves the risk of serious disease

Commuting to work by bicycle reduces your risk of getting cancer by 45% and developing heart disease by 46% compared with commuting by car or public transport, according to a study published in the British Medical Journal (April 2017) and reported on the BBC news website.

While the research found that walking to work was also associated with a lower risk of heart disease, the statistics showed that cycling makes you significantly more healthy. The study states:

Another recent study, carried out by the University of Birmingham, found that regular cycling keeps you young – it holds back the effects of ageing and, importantly, rejuvenates the immune system. Amateur cyclists aged 55 to 79 were found to have immune systems as effective as those of healthy young adults.

Prof Janet Lord, director of the Institute of Inflammation and Ageing at the University of Birmingham, said:

“Our findings debunk the assumption that ageing automatically makes us more frail. We now have strong evidence that… regular exercise is a viable solution to the problem that we are living longer but not healthier.”

More benefits of cycling to work

Currently, 62% of Bath’s population is overweight or obese and largely leads sedentary lifestyles. This is imposing an additional burden on our local NHS.

Bath has a particular problem with people using their cars to travel short distances (36,000 car movements per day within Bath), which could be reduced if there was more active encouragement for people to switch their mode of transport.

By making cycling part of your daily routine, you’re getting the benefits of being active without needing to muster the willpower, or set aside time, to exercise. Commuting by bike is much easier to build into your everyday life than going to the gym, for example, because it’s an incidental activity – you need to get to work anyway.

An added benefit of riding to work is that it reduces pollution.